A Wolverhampton Wanderers official visited the north of Portugal at the weekend, and watched Porto’s 4-0 win over Vitória de Setúbal on Sunday.

The scout’s presence at Estádio do Dragão is reported by newspaper Record, who doesn’t know a lot about the mission.

Wolves had previously been at a couple of Porto games this season, so it seems it’s a club they’ve been keeping an eye on. It’s worth recalling that Nuno Espírito Santo worked there before going to Molineux, and should keep good connections at the Dragons.

Porto had no difficulty winning the game, with goals scored by Mbemba, Fabio Silva and Moussa Marega, besides an own goal from Vitória defender Jubal. Midfielder Ivan Corona was man of the match. 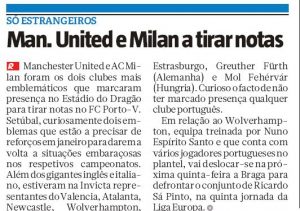 One of these players has been linked to Wolves in the past, and that’s Marega. However, the Portuguese press has reported interest from half the Premier League in him, so it’s hard to believe the stories around the striker.