Wolverhampton Wanderers may have been eliminated by Manchester City in the League Cup’s round-of-16 last night, but it doesn’t mean their performance won’t be praised. Especially by the Portuguese press, who always keep an eye on the local managers and now had the chance to watch Nuno Espírito Santo facing Pep Guardiola.

Newspaper O Jogo highlights the ‘brave 120 minutes’ Wolves had when holding a 0-0 draw against City, despite then losing the penalty shootout.

Most of the credit for City’s qualification goes for Claudio Bravo, who didn’t only do well on penalties, but also with crucial saves during the game. 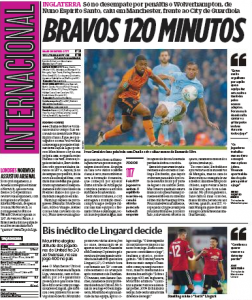 O Jogo claims qualification was ‘unexpectedly difficult’ for Manchester City, while Nuno Espírito Santo ‘deserves applause’ for finding a way to stop Pep Guardiola’s side from playing well as usual.

As you can see in the picture, the match report is given much more attention than Manchester United or Arsenal qualifications.

And in case Wolves had won the game, we’re pretty sure it would have been front page news.