Wolves are receiving some nice praise from the Spanish sport media after drawing Espanyol in the Europa League on Monday.

Spanish newspaper AS call them the ‘English sensation’ and explain to their audience just how good Wolves have been doing in recent years.

Jorge Mendes gets a mention, of course, and AS point out Wolves are again fighting for a European place in the Premier League, making it clear that last season’s success certainly wasn’t a fluke.

Nuno Espirito Santo is said to have a built a very ‘physical and powerful’ team, and it’s seen as a big sign of the team’s strength that Patrick Cutrone isn’t a regular starter despite Wolves having paid €18m for him.

The English side are a ‘rival to take into account’. 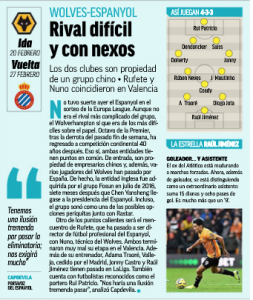 Marca say despite Wolves not being one of the biggest names in the Europa League draw, they are ‘one of the most difficult on paper’, and therefore Espanyol have been unlucky.

They give an interesting slant on the match, explaining it will be a chance for Nuno to reunite with Rufete, Espanyol’s sporting director.

The pair worked together at Valencia and it’s stated the period ‘ended very badly’ for both.