Despite strong claims from the Portuguese media this month saying the player was close to moving to the Premier League side, a report from newspaper A Bola isn’t that confident this time.

The outlet reports that CSKA currently have officials in Lisbon to sign the 25-year-old. They want to offer €10m, but Sporting demand €15m, and a deal could be found halfway.

Regarding Wolves, all A Bola has to say is that the English club have been following Palhinha for a long time, and remain ‘attentive’ to the situation. 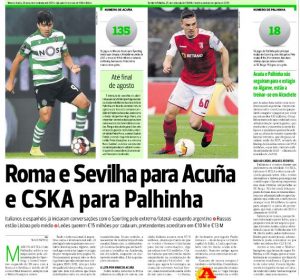 It isn’t even said if Wolves plan to make a bid for the midfielder soon, and that makes it look like he’s a lot closer to moving to Russia instead of England.

Previous reports from Portugal had claimed that Wolves would sign Palhinha for between €12m and €14m. So the claims regarding the price demanded by Sporting appear to be true, yet Nuno Espírito Santo’s side don’t seem keen on paying it.