Turkish newspaper Fotomac report Galatasaray are keen to sign Arsenal’s Mohamed Elneny, and they are advancing in negotiations for the player.

The Turkish side are in the market for central midfielders after Fulham’s Jean Michael Seri and Southampton’s Mario Lemina returned to their parent clubs. The club’s captain Selcuk Inan has also retired from football.

It’s reported that Gala manager Fatih Terim is very keen to sign Elneny, and he’s urging club’s board get a deal done with Arsenal.

Fotomac say Galatasaray are ready to use the money they receive from the sale of Maicon to loan Elneny, and they are ready to pay €1.5m a season to the Egyptian.

Talks with Arsenal are set to continue in the coming days and Fotomac report the former Besiktas midfielder is edging closer to a move. 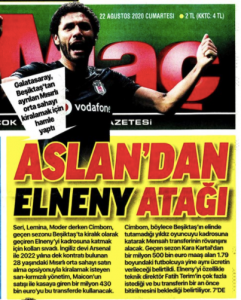 However, despite these claims, there were recent reports he was close to signing for fellow Super Lig side Trabzonspor and that he’d agreed personal terms with them.

Elneny made 37 appearances for Besiktas last season and is under contract at the Emirates until June 2022.