Home Europe Wolves asked for clause which would see 80% of games played –...
SHARE

Wolverhampton Wanderers fullback Ruben Vinagre was announced on Tuesday as Famalicão’s new signing, arriving on a loan deal until the end of the season.

The 21-year-old spent the past few months on a spell at Olympiacos, but due to little playing time at the Greek side, he’s now moving to his home country.

“Having the opportunity to play professionally in my country was one of the reasons that made me accept Famalicão’s invitation,” Vinagre told Famalicão’s website.

“The Portuguese league is one of the ones that most value young players and elevates them to high levels and, therefore, I’m happy to be able to play in a club that allows this opportunity. I grew up here, I was trained in Portugal and I was always curious to know what it was like to play in the Portuguese league.” 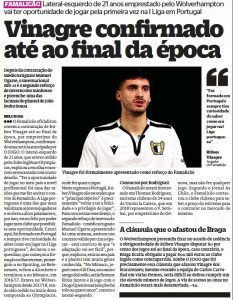 As Portuguese newspaper O Jogo reports the announcement made by Famalicão, they also bring some news on the talks with Braga, who nearly won the race for the player.

According to their report, Wolves wanted a clause to guarantee that Vinagre would play 80% of their games, otherwise the club would need to pay them €800k.

Braga thought it’d be unlikely to give Vinagre that much playing time and backed off from the deal, even though the move had even been reported by local outlets at the time.

O Jogo adds that it’s easier for Vinagre to get into Famalicão’s starting team, although they don’t confirm the clause is included in this new deal.