Wolverhampton Wanderers winger Pedro Neto has reportedly missed the chance of having extra €1m in his bank account.

According to a report from Portuguese newspaper Jornal de Notícias, the Guimarães Court has decided that Braga do not need to pay the player that amount for a transfer bonus.

The winger’s old contract with the club said he’d get €1m in case he got transferred until August 2017. He indeed had a move in that time, but on a loan to Lazio, which was only made permanent in 2019, and that’s when the controversy started.

Pedro Neto filed a complaint in 2020. In April 2021, the Work Court said Braga owed him nothing, and with the player making a new attempt in the Guimarães Court of Appeal, a new negative result came out yesterday. 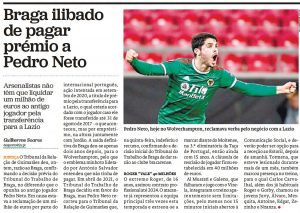 Pedro Neto stayed on loan at Lazio for two years. During the summer of 2019, when his move to the Italian side was made permanent for €11m, he then ended up being sold to Wolves, who paid €17.9m for him.

The winger is still to feature for the Molineux side this season following the knee injury he picked up earlier this year.