On September 19th, we relayed news from Italy that Liverpool are among the suitors for Franck Kessié.

The midfielder’s contract at Milan expires in 2022 and there has been no progress in talks over a new deal.

As per the report, the proposal is raised to €6.5m per season. However, the Ivory Coast international wants €8m, and this is because there is a ‘strong club’ behind him. For now, all clues lead to Paris Saint-Germain, ‘without neglecting the Liverpool candidacy’.

The coming weeks will be important to understand whether there will be any progress made over renewing the contract or if the Rossoneri must look to part ways with the player in January. 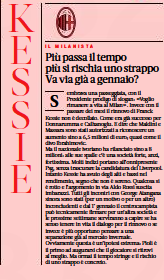 Over at Corriere dello Sport, they highlight the player’s mixed performances this season, including the red card he received against Atlético Madrid.

It’s said Kessié is ‘distracted’ with the contract situation. Things are unlikely to improve soon since the gap between supply and demand over a new contract is yet to be narrowed down.

Taking the current situation into account and with Liverpool and PSG ‘on the trail’ of the player, Corriere say Milan selling Kessié in the winter market cannot be ruled out.