If you have closely followed Sport Witness’ coverage of the Italian media, then there’s a good chance for you to stumble upon a report on Chris Smalling.

The defender is on loan at AS Roma from Manchester United and earlier reports indicated the Serie A side want to retain him.

Saturday’s edition of Corriere dello Sport claims the former Fulham man will continue his loan stay at the Italian capital for one more season and his transfer will be made permanent in 2021.

It’s claimed Roma held a ‘positive conversation’ with an intermediary, who works on behalf of the Red Devils, on Friday.

Over in England, there have been reports stating that Ole Gunnar Solskjaer’s side will collect €20m for Smalling.

However, Corriere say the Giallorossi will pay €15m to United next summer, but the details of the loan fee aren’t mentioned. The deal is yet to be finalised, but there’s belief at Roma it will get over the line.

Smalling is expected to sign a contract until 2024 and will earn €3m per season at the Stadio Olimpico.

Calciomercato also report Roma are ‘one step away’ from completing the operation for the Manchester United owned player. 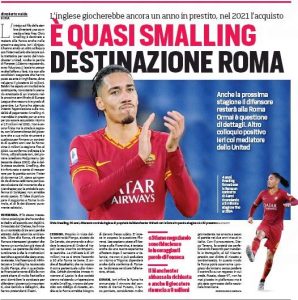 Paulo Fonseca’s side will pay a loan fee of €3m for the next season and €17m to make his stay permanent in 2021.

According to the website, Roma are waiting for approval from United for a ‘deferred form of payment’, which would allow them to pay the transfer fee over a period of three years.