If there were any big hopes that West Ham could sign William Carvalho soon, A Bola has done a pretty good job of ending them.

Despite the failed negotiations over the summer, there was still some expectation from the Portuguese press the Hammers could try for the player again. It’s what all neutrals wanted, another very public scrap between West Ham and Sporting.

But now West Ham are being ignored by the Portuguese media. An example of that is Thursday’s story from A Bola, who only puts AS Monaco as a possible contender.

And regardless of being mentioned or not, there are two good reasons why Carvalho wouldn’t be signed by West Ham anytime soon. 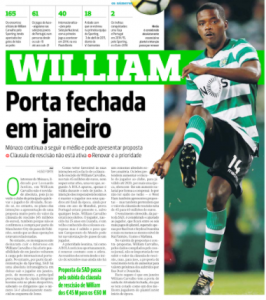 The first one is that the release clause can’t be activated until the summer. ‘Doors closed in January’, as the story says. That would keep the midfielder at Sporting at least until the end of the season, when he could become even more expensive due to the club’s good campaign and also the World Cup.

And there are also the talks for a new contract. Although O Jogo had claimed that William didn’t want his release clause to change, A Bola say not bothered about that, as long as he gets a pay rise as well.

So it means that he’s not leaving the club in January, and when it gets to the summer, he would be protected by a €60m release clause.

David Moyes may be a long time fan, but West Ham would have to be pretty convinced that William is worth all that money. Plus a battle with Monaco would be very likely as well.

The ship has sailed.