Home Europe “I have to make a name for myself” – Leicester player may...
SHARE

Vicente Iborra will have gone off into the international break in a pretty good mood. A goal and a good performance against Stoke City, albeit in a 2-2 draw, is a sign that things are starting to go better for the former Sevilla captain.

Iborra had tried to move to the Premier League a year earlier, with Sunderland interested in the player. He’ll have been happy to miss out on that, and relegation, and instead enjoyed another good season with Sevilla.

But the England dream wasn’t dead and Iborra switched to Leicester City during the last window, since then he’s been working to impose himself.

Back in Spain for an international period break, Iborra has been speaking to Marca and was asked if it’ll be harder to get international recognition with Spain whilst playing in England: “It may be more complicated being outside, but it’s something that I have there, a dream that I would like to fulfil. I will never lose faith and hope. I hope I can do it.” 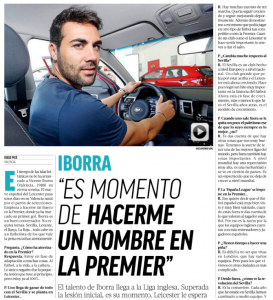 Then asked about the future, with the Spanish media always believing a player only leaves the country temporarily, the Leicester midfielder said: “My goal is to make things right for Leicester, which is the club that has bet on me and has made me feel important. And from there grow in the Premier League and in English football. It’s true that in the future I would like to return to Spain and Levante (where he came through the youth system), but now it’s time to grow in the Premier League. Now I have to make a name for myself there.”

Marca also asked Iborra if in England it’s thought Barcelona could play in the Premier League, given the Catalan situation, and rightly rubbished it: “No, I see that being complicated. I think that in the end Barça want to play and will play in the Spanish League. I think it will be like that.”