Wednesday’s edition of L’Equipe has an article which will certainly draw interest from West Ham United supporters.

The French newspaper has a look at the transfer situation at Saint-Etienne. The Ligue 1 side are already planning for the summer window, and are busy with signings and contract extensions.

But it won’t all be positive for the club, and there’s likely to be outgoings, and maybe an important one.

L’Equipe state that West Ham are one of the clubs who have made ‘concrete steps’ for Yann M’Vila. The midfielder is probably best known in England for his spell with Sunderland, and his many links with Arsenal and other clubs. 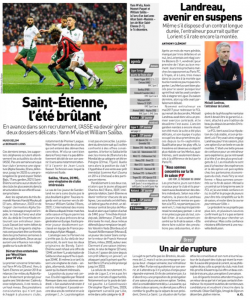 Now 28 years of age, M’Vila moved from Sunderland to Rubin Kazan, before moving back to France.

M’Vila is described as being close to current Saint-Etienne manager Jean-Louis Gasset, and if he were to leave then the footballer would likely be more positive about an exit.

There’s no explanation from L’Equipe on what transfer fee West Ham would have to pay.