West Ham, Southampton, and Crystal Palace are being taken as a group by the Spanish media when it comes to interest in Munir El Haddadi. Monday’s edition of Mundo Deportivo reported the three are showing the ‘most interest’ in signing Munir from Barcelona this summer.

Tuesday’s edition of the other Catalan sport newspaper, the imaginatively named Sport, also says that West Ham, Southampton, and Crystal Palace (in the same order, for some reason) are very keen on signing the player.

So much so that all three clubs are prepared to pay €8-10m to get the player, who spent last season on loan at Valencia. Barcelona want to receive €14m, and Zenit have already offered more than this, in a brash Russian kind of way, but Munir doesn’t fancy the move. 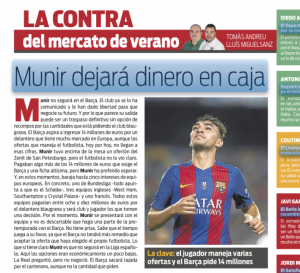 With Barcelona keen to sell this summer, their price may well have to come down, and whilst the Premier League trio of Slaven Bilic, Mauricio Pellegrino, and Frank de Boer would be able to compete on price with most, they’re not alone in their interest.

Bundesliga side Schalke are also keen, and seem to be endlessly on the search for stardust.

Perhaps Wednesday will see a Catalan report that West Ham, Southampton, and Crystal Palace have all agreed to up their potential offers to €12m.