Catalan newspaper Sport reported on Tuesday that Southampton were ‘about to close the signing’ of Barcelona defender Marlon, before everything went wrong.

Today’s edition of the same publication claims the La Liga winners have failed to ‘arrange a transfer’ of the Brazilian centre-back to the Saints.

He joined OGC Nice on a two-year loan deal last summer and the Ligue 1 outfit had an option to sign him on a permanent transfer in 2019.

Marlon’s form for Nice saw him attract interest from England and Barcelona decided to end his loan deal and bring him back to the club, so they can cash in from his sale in the summer transfer window.

Since a move to Southampton is dead and he’s not in Ernesto Valverde’s plans for the next season, the Blaugrana are looking to offload him this summer. The report claims West Ham United are ‘still interested’ in Marlon, and that he’s also a target for Hertha Berlin and Fenerbahce. 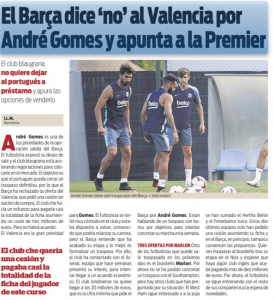 The Spanish champions’ idea is to allow the 22-year-old join an English club who they hope can pay more than €10m for Marlon. At the beginning of June it was reported West Ham were looking to pay €10m, whereas Barca wanted €25m.

This could be a case of the Catalan club becoming greedy when English sides got involved, and now regretting it. West Ham have got on with other recruitment, and whilst the reports claimed there’s still interest, that may be more through hope than expectation.