Bild have only gone and done it.

The German newspaper have a feature on players who could be leaving Bayern Munich this summer, and one of those is said to be Arturo Vidal.

The 31 year old has a contract expiring in June 2019 and it’s thought he needs to make way for Leon Goretzka.

Chelsea had been interested but the man pushing that was Antonio Conte. ‘Still interested’ are Napoli and… Manchester United.

Bild say there’s a hurdle before a transfer, because Vidal is recovering from minor knee surgery and only started running last week as part of his rehabilitation.

So, we have Manchester United keen on Vidal but his knee injury is causing worry, it’s like 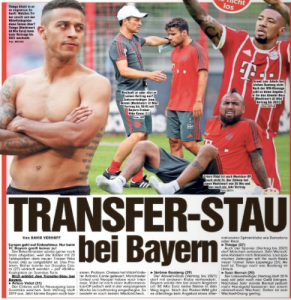 2014 all over again and the world surely doesn’t need to go through that transfer saga once more.

Bild believe Vidal has a ‘market value’ of €35m, which seems a little high considering several factors. That knee, his age, only having a year of contract left, and that Bayern are apparently keen on parting ways.