Mixing West Ham with Portuguese transfers has been a recipe for entertainment over the past couple of years.

In the summer 2017 transfer window, Sporting denied having received an actual West Ham offer for William Carvalho. That led those in charge at the Hammers to insist an offer had been made, insinuating the Lisbon club were lying.

“These messengers, these offended virgins, the president of West Ham… We must tell the truth!”

He continued to speak about the ‘war’: “The West Ham people can say whatever they want. We have already said that we are going to file a complaint with FIFA. With West Ham you see the problem of clubs having owners. For €25m we would not even send Umaró Baldé, much less William. They knocked on the wrong door.”

It turned out the €25m offer was spread over 3 payments, including bonuses for West Ham CL qualification (with even caveats placed on that), and a threat that if it wasn’t accepted quickly enough… they would loan a PSG player instead.

Last summer it was reported in Portugal that a West Ham delegation, including David Sullivan Jr, arrived at Porto to negotiate the signings of several players, including Yacine Brahimi, and that turned into something of a farce too.

Now, the English club seem to have their eye on a smaller Portuguese side, Portimonense.

Shoya Nakajima has been excelling for the club this season, and West Ham had someone watch him against Rio Vitoria on Friday, report A Bola.

The Japan international is thought to be close to a move to the Premier League, although Sevilla are also keen, and the club’s president said a week ago: “There has been a conversation, but it is not yet 100% finalised, but it is possible already in January. What is at issue is the payment of the entire termination clause or not, so it has not been 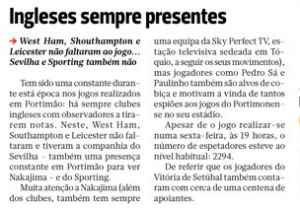 finished. Nakajima is 80% at Wolverhampton.”

He’s since suggested the winger could also go elsewhere.

Initially a transfer fee was estimated at €20m, but now Portimonense are trying to push it closer to the player’s €40m buyout clause.