West Ham had an official at Porto’s match on Saturday, reports A Bola.

They were the only Premier League club in attendance, with Liverpool having a scout in the stadium. However, the Reds will be watching ahead of the second leg of their Champions League tie, whereas the Hammers will be working on transfer preparation.

West Ham have tried to sign several players from Portuguese football in recent season, with some of the failures leading to quite entertaining stories. It would be no surprise if they make another attempt during the summer window.

A Bola don’t say who West Ham had their eye on. Porto beat Portimonense 3-0 away from home, and Moussa Marega was the star man, scoring his club’s second. 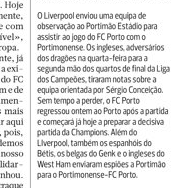 The other two goals were scored by Yacine Brahimi and Hector Herrera, who both have contracts expiring in the summer.

All three have been linked to West Ham previously, and this trip will only serve to encourage further reports.