According to claim in the Belgian media, West Ham United and Middlesbrough were keen to sign Thomas Meunier after Euro 2016.

The 26 year old had helped Belgium to the last eight of the competition before they were eliminated by Wales.

Belgian sport magazine SportFoot have reported a number of clubs were interested in signing Meunier for Club Brugge last summer, including Middlesbrough and West Ham.

Napoli, Torino and Manchester City were also reported to be tracking the right back. Meunier even confirmed clubs from England were following him after his Euro 2016 performances. 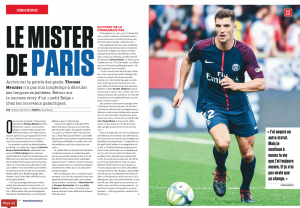 At the time Middlesbrough were preparing for their return to the Premier League after achieving promotion from the Championship in the previous season under Aitor Karanka.

West Ham were also looking to strengthen their squad that summer, as manager Slaven Bilic looked to build on their impressive 2015/16 season, when the Hammers finished 7th in the table.

However, Meunier snubbed a move to the Premier League to sign for French giants PSG despite more lucrative offers being made to the player.