Home Europe Germany Thousands of Celtic fans take over Marienplatz, in the ‘mood to party’
SHARE

Celtic fans have taken over Marienplatz in Munich ahead of Brendan Rodgers’ side facing Bayern tonight.

Earlier today we reported on Celtic fans taking over a Munich pub last night, with spirits high among the travelling Hoops supporters.

Merkur have reported on the Celtic fans that have travelled to Munich for tonight’s Champions League group stage game, and it seems a large majority have found themselves in the city’s main square.

The German newspaper say the Celtic Park faithful are in the ‘mood to party’ and that they’ve been in good humour throughout the day. 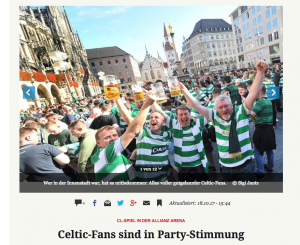 Only a lucky few thousand Celtic fans will be in attendance at the Allianz Arena tonight, and it’s likely many have made the trip to Germany without tickets. However, it seems from reports in the German media they’ve been well received since their arrival in Munich.

Celtic will be hoping to get something out of the game against Bayern Munich, after beating Anderlecht in the last game. Goals from Leigh Griffiths, Patrick Roberts, and Scott Sinclair secured all three points in Belgium, but Rodgers’ side face a massive test at the Allianz in the next few hours.