West Bromwich Albion have asked to postpone the payment for the signing of Matheus Pereira, according to reports from Portugal today.

Newspaper O Jogo are the ones saying the Baggies have contacted Sporting saying they can’t afford the €10m for the move now.

It’s said Pereira’s loan has already been turned permanent due to a clause about his number of appearances for West Brom this season.

However, due to the Coronavirus pandemic, the Championship side explained the situation they’ve been through, and Sporting have accepted it, due to the good relationship there is between the clubs. 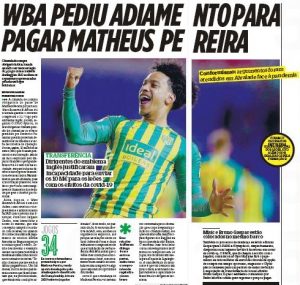 O Jogo recalls quotes from Sporting directors who said in March there were clubs with pending payments, and now the outlet says they found out one of them was West Brom.

There’s been a little confusion regarding the clause which would make Pereira’s move permanent. A few sources say he should make 32 appearances for the club, while other say all of these games should be in the Championship.

Either way, the Baggies would have the option of triggering it regardless of the number of appearances, and have made it clear they want to keep the player.

They just need to wait a bit so they can put the money together.