There’s one day left of the transfer window and Mathieu Debuchy remains an Arsenal player.

L’Equipe explain, in their Tuesday edition, that Debuchy still has a faint dream of being in France’s World Cup squad this summer, and therefore desperately needs to find a new club before the window slams shut.

So far there hasn’t been a great deal of serious interest, putting Debuchy in a difficult situation, but once again West Brom are named as a possible destination.

The French newspaper say West Brom have come forward with their interest in the Arsenal player, but didn’t really go too far into negotiations, and the same can be said for Ligue 1 side Saint Etienne.

L’Equipe suggests both clubs could be waiting for ‘money time’, the end of the market when business has to be done. 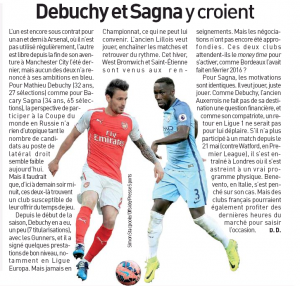 It happened for Debuchy in 2016 with Bordeaux, and now he has to hope it happens again with West Brom, ASSE, or another club.

Arsenal aren’t thought to be against a late move, and Debuchy will now be encouraging his representatives to try and sort something out.

Bacary Sagna, who has even fainter national hopes, remains without a club.