Marca don’t try and dress it up for Sandro Ramirez.

In their Tuesday edition the Dutch newspaper go with a headline saying ‘Sandro, last alternative’ and explain Sevilla are back in the picture to sign the Everton player.

Sevilla had other options before Sandro, the strongest and most recent being Michy Batshuayi from Chelsea. With the Belgian striker now looking to be on his way to Borussia Dortmund, Sevilla have given up much of their hope, but not all of it.

Sandro to Sevilla has ‘regained strength’ in recent hours, explain Marca, and the Everton player is now back on pole position for a move to the Spanish club.

Once again, the way it’s reported it seems the Spanish media believe Everton won’t be too difficult to deal with for Sevilla, and the Premier League club and Sandro are just 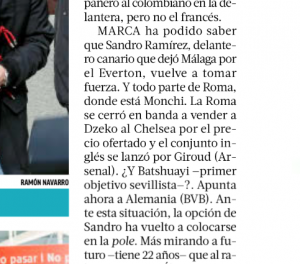 waiting patiently for a call.

That may be true, or Sevilla may be shocked when they contact Everton and are asked for actual money, rather than faint promises of it in the summer, whether that be on a loan or permanent deal.

There’s a rush now on across Europe as the Aubameyang, Giroud and Batshuayi dominoes could set further off.