De Telegraaf, of course, have a big piece on Nicolai Jorgensen in their Tuesday edition, and how Newcastle United missed Feyenoord’s 6pm deadline to reach an agreement.

Aside from all the muscle flexing and strong talking on behalf of Feyenoord, what comes across clearly is Newcastle United’s unwillingness to move closer towards the Dutch club’s demand of more than €20m.

Feyenoord had come down from €25m, and whilst Newcastle raised their original offer from around €14.5m to €17m, they hadn’t made the same kind of effort and, if De Telegraaf are to be believed, showed no signs of being willing to do so.

There’s no suggestion Newcastle asked for a deadline extension, and it’s not presented like the club are expected to give it another go, once it became clear Feyenoord wouldn’t drop down their price again, the interest seems to have died. 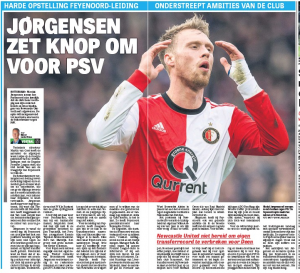 Newcastle believed Feyenoord ‘would play for €15m’ and then it’s though panic set in on Sunday night, hence the Daniel Sturridge reports.

De Telegraaf don’t believe Mike Ashley wants to pay more than €22m for a transfer, what they believe the club’s record currently stands at.

De Telegraaf say it’s absolutely dead and Jorgensen is going nowhere. A Newcastle United offer early this morning of over €20m could change that, although the Dutch claims think not, but it’s very much not expected to arrive.