With River Plate confirming last night their Argentine League title with a 4-0 win over Racing, local newspapers are today of course full of stories about their campaign.

And the player who gets the spotlight is Julian Alvarez, who scored 17 goals for the Millonario this season, and could be soon leaving the Monumental de Nunez for a European club.

It turns out that Aston Villa are today back to being named as one of the potential destinations for the striker, although the competition for his signing should be huge.

Newspapers Olé and La Nación both have stories about his future, and the information is the same: he’s protected by a release clause worth €20m, and since River Plate’s plan is to keep him for a little longer, that should be his price tag for the upcoming windows.

The list of competitors brought by the two outlets is the same as well. It’s said that besides Aston Villa, there’s the interest from Bayer Leverkusen, Fiorentina, Milan and Real Madrid. 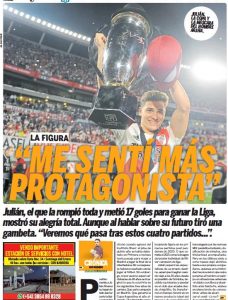 None of those clubs seem to have got close to the signing for now, and while La Nación say Alvarez had in July an offer from the MLS, where Orlando City wanted to pay US$10m for his transfer, neither him or River Plate got excited with that possibility.

“We’ll see what happens, there are still four games left”, said Alvarez last night, knowing that he’s about to become one of the main targets in the upcoming transfer windows, with Steven Gerrard seemingly waiting for him at Villa Park.