The 22-year-old actually belongs to PAOK, and should return to the club at the end of the season. Still, the Lions plan to take him in the January window.

O Jogo claims that Sporting have already made an approach for Koulouris, but they’ll have some competition, as Watford would also be interested in the player.

It’s said that the Hornets have been monitoring the striker for a while, which means the Lions shouldn’t have an easy path to get him. 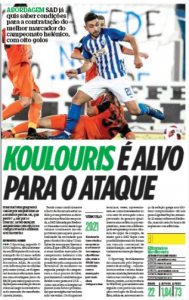 PAOK are said to be demanding €7.5m for the player, which would be an excessive amount for Sporting.

That would definitely give Watford an advantage, although the report doesn’t really make it clear if the Hornets are planning an attempt for the January window.

Koulouris has 11 goals for Atromitos this season, and is currently the Greek League’s top scorer with eight.