Home Europe Watford said to have made approach for La Liga player to replace...
SHARE

Barcelona are looking to offload a few of their fringe players in the summer transfer window.

Sport claims the ‘delicate situation’ has seen the La Liga winners take into account several scenarios at the same time in allowing their player leave. This is the case with Paco Alcacer.

Watford were ‘interested’ in the 24-year-old’s situation a few days ago. The Premier League club saw Richarlison leave Javi Gracia’s side and reunite with his former manager Marco Silva at Everton, a year after arriving at Vicarage Road.

The Hornets wanted to replace the Brazilian with the Camp Nou outfit’s attacker. However, Barcelona’s response to Watford was blunt, ‘no thanks’. This is because Ernesto Valverde’s side are waiting for another proposal for their player.

Barcelona and Alcacer see a possibility of the player returning to Valencia. However, for this to happen, both the club and forward will need Real Madrid’s help, and this is where the capital club’s interest in Rodrigo is said to come in. 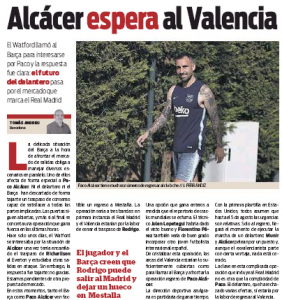 Only if Real Madrid complete the signing of Rodrigo, then Valencia will have enough funds to bring Alcacer back to the Mestalla. That would be the preferred option for Alcacer, over Watford.

It all seems a little complicated.