After an impressive first year under Javi Gracia last season, Watford will be keen to build on that this summer.

That will require backing from the club’s owners, with signings needed across the squad if they’re to make a serious push for the top ten next season.

And according to L’Equipe, adding a forward to their ranks has become a priority as the Hornets are pushing hard for Stade Rennais star Ismaïla Sarr this summer.

The newspaper reports that Watford are ‘confident’ of securing the 21-year-old’s signature this summer. They’ve ‘increased their exchanges’ with Sarr and his entourage, a contract has been drawn up and the player has confided he’s heading to Vicarage Road.

However, a deal with the Ligue 1 club is yet to be done. Watford have already made a €30m bid but that’s not good enough at present and they will need to increase their offer. 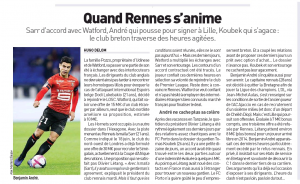 They remain keen, though and have ‘not hesitated to employ foreign intermediaries well known in the French market to finalise the deal.’ The Pozzo family are said to be behind this step.

That suggests they will continue to push for his Sarr’s signature, although until they stump up more money, Stade Rennais are unlikely to play ball.