Perhaps never before has a fan’s flag defined an international break so much.

Wales. Golf. Madrid. In that order.

For over a year the Spanish media have been pushing a narrative about Gareth Bale’s love of golf.

Back in October 2017, we covered the first character assassination attempts from El Confidencial. The Spanish publication, which appears to have good connections at Real Madrid, had done similar before.

Mesut Ozil was presented as an unprofessional partier just before he was sold, yet they couldn’t throw the same accusation at Bale. So golf was chosen.

‘All these injuries add to the chronic back problems he suffers and that causes discomfort and muscle injuries that break his pace. An evil, that of the back, which increases when he plays golf, one of his passions to which he devotes all the time he can when he does not play football.’

They were back at it the following February: ‘The muscular injuries derived from his back pains, increased by his passion for golf, have not allowed him to have regularity in Los Blancos starting team.’

Since then it’s been a regular theme in the Spanish sport media. Given they don’t have an awful lot to throw at Bale, golf has been clung to.

Former player Predrag Mijatović said in October:  “He thinks first of the Wales team, then golf and then Madrid. I have not talked to him, but it is what he transmits to me. You never know if you can count on him, if he is motivated or not, if he is injured or not… but you will see how he will improve when the national games approach.”

At the start of the current international break, there was fury Bale was set to play for Wales. He’d been out of action since the previous Wales trip and the thought of him missing Madrid matches and then playing for his country caused annoyance.

Marca said ‘however much it may seem strange or unliked among Real Madrid fans’, the former Tottenham star was missing club games and then going away on international duty.

This all inspired a Wales fan to come up with the flag, with a little help from Mr Flag.

What? Well, having seen Mijatović’s comments, Wales fans took to social media, with one saying it’d look good on a flag.

Spotting an opportunity, Mr Flag, based in Wales, naturally, suggested he do the job. Buzz Boncath took up the offer and a week later it was all done.

Your flag is ready, has a fire certificate attached, and is shipping to you today. Thank you for your order. 🙏🏴󠁧󠁢󠁷󠁬󠁳󠁿 pic.twitter.com/Zbbff2JhAr

The Spanish media learned of the flag, and it created some waves, especially after Bale was asked about it and couldn’t hide his view that it was hilarious.

Wales then beat Azerbaijan, which set up the big Cardiff night against Hungary, and after the glorious victory, Gareth and his teammates paraded around the pitch… WITH THE FLAG. 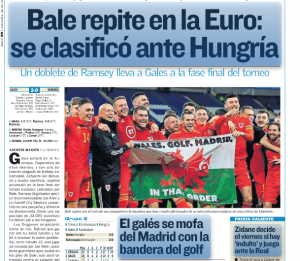 Spanish newspaper AS say ‘The Welshman mocks Madrid with the golf flag… An act that hasn’t been liked in the heart of the Madrid directive and that will not please many blancos fans’.

El Confidencial go with ‘The unfortunate sneer of Gareth Bale that leaves Real Madrid in a bad place’, before adding ‘as soon as the game was over, the image and the video ran through social networks and provoked the anger of Real Madrid players who feel that the highest paid footballer of the squad (17 million euros net per year) does not have enough commitment.’

They talk of ‘indignation’ at Madrid, and a feeling of ‘disrespect’.

El Espanol call the situation ‘an authentic earthquake’ and claim ‘The subsequent laughs of Bale holding the flag of Wales in which the controversial message was seen has unleashed the wrath of Madrid’.

El Correo: ‘As if the flag were not enough, a song could be heard in the stands with the same message with which Bale posed. «Wales, golf, Madrid», which reviews the player’s supposed priorities.

We could do a whole article for Marca, but here are some of the best bits:

‘Bale has squeezed the patience of Real Madrid until it reaches the white of the orange, where it begins to sour, where there is no longer pulp or juice or good taste, only resentment, that ugly aftertaste that passes from the palate to memory and smears good times.’

‘Yes, Bale is the one with four Champions Leagues, but also the one that does not respect either the club or the fans.

‘And it is those ugly details of Bale that are going to take him out of the wall of memory, of the hall of fame, from the pedestal in which memory encumbers players like him. A legend will be Modric, a legend will be Benzema, a legend will be Marcelo. Gareth Bale will never be remembered with the love of relationships in which there has been a love so sincere that time can only mitigate it and not erase it. Madrid has taken too long to part with the Welshman.’

‘Madrid are fed up with the player’s lack of respect for his club.’

‘A new mockery of the team that has him on the payroll, who pays 17 million euros per season and has endured for years his rudeness, his lack of professionalism and, above all, his countless injuries.’

Spanish journalist Ruben Martin took to Twitter to say: ‘He laughs at Madrid. At his fans and his teammates. He doesn’t care about anything. He doesn’t deserve to wear that shirt. And he shouldn’t wear it again. Never.’

Madrid Sports: ‘Rescind his contract today’ and ‘We have always defended you, we have had patience with your thousand injuries, we have celebrated your goals and assists, we have defended your passion for golf and your limited Spanish. But enough. You are laughing at, as you put on the flag, Madrid’.

Sport Witness asked Jonathan Barnett, Bale’s agent, what he thinks of the Spanish media’s obsession with the footballer’s love of golf, to which he replied: “The whole media campaign is a disgrace and a lot of it is complete lies. Some of the so called media should be very ashamed of themselves.”