Erling Braut Haaland’s performances this season have caught attention of top clubs across Europe as the Red Bull Salzburg star has amassed 26 goals and six assists in all competitions, which includes seven goals in four Champions League appearances.

Earlier this month, The Guardian reported 20 European clubs are chasing the Norway international with Juventus and Manchester United leading the queue.

Arsenal were mentioned as one of the clubs who has scouted the 19-year-old, but there has been no significant claims to suggest the Gunners will move for the player.

That was until Sport Bild came up with the latest development on Haaland’s case and they state Unai Emery’s side are ‘as interested’ as their rivals United and Bayern Munich. 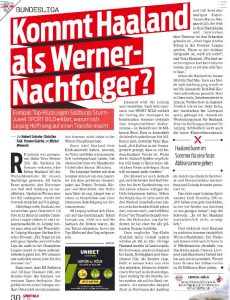 Arsenal already have the services of 30-year-old Pierre-Emerick Aubameyang and Alexandre Lacazette, along with summer signing Gabriel Martinelli.

To avoid overcrowding, the English club may only convert their interest into an offer for Haaland if one of the current three strikers leaves.