If Gazzetta dello Sport are to be believed on Wednesday, then Olivier Giroud could be edging closer to a move to Inter in January.

Already one of the more prominent sagas leading up to the next transfer window, the Chelsea forward’s future seems to be further and further away from Stamford Bridge as the weeks go by.

Gazzetta dello Sport dedicate a good half page to the story, explaining how the 33-year-old is the ‘ideal profile’ for a January transfer at San Siro, and Inter are studying the ‘advantages and disadvantages of the operation’.

The obstacles remain largely the same as they have in the past, namely the player’s wages, but there’s also the length of the contract on offer from the Italians that doesn’t quite suit Giroud.

The Serie A side would like to hand him an 18 month deal that would keep him in Milan until 2021, but the veteran, who still has full faith in his ability, would like an extra year on top of that, meaning a deal until 2022. 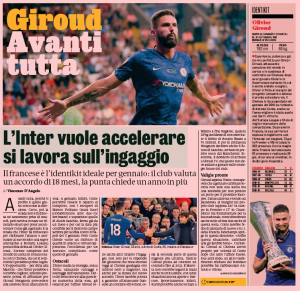 Beppe Marotta, the man in charge of such decisions, reportedly ‘doesn’t want his hands tied’ in too many problems, as there’s still a chance Mauro Icardi could return from Paris Saint-Germain.

There’s also the big question mark over Alexis Sánchez, whom Inter could keep, meaning that while they want Giroud, they won’t do it whatever the costs.

Down the player’s end, it’s said the Chelsea man is ‘waiting for Inter’ with his ‘bags ready’, knowing full well a change of clubs isn’t a ‘choice’ but a ‘necessity’.

More to come on this, undoubtedly.

Sven Mislintat looking to sign Arsenal man – Hoping to use...

Man United may be presented with chance to sign ‘€60m’ star...

Everton ‘remain in pressure’ for defender – Ancelotti has identified him...