Nearly every Saturday, the sport section of Jornal di Noticias has a transfer story relating to the Premier League, and it’s often related to Wolves and/or Gestifute players.

Jornal di Noticias tend to be calm, they don’t fire out endless transfer claims and usually save what they have for this supplement.

Today is no exception, with Ruben Neves being the subject of the front page splash. Manchester United and Barcelona are credited with interest in the Wolves midfielder, and it’s thought any Arsenal interest has now slipped away.

Manchester United ‘remain’ in the picture, but Wolves are said to be insisting they’ll only let him go for €50m. Such a figure would almost certainly rule out Barcelona, who were looking for a bargain deal. 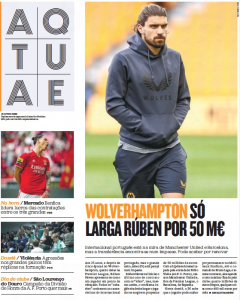 However, the situation is ‘in a deadlock’ and there’s even the possibility of Neves staying at Wolves and renewing his contract. That could explain why Bruno Lage’s club have seemingly let Fulham push them to one side for Sporting midfielder Palhinha.

JN say that should the renewal happen then Neves would be paid around €4m a year after tax.