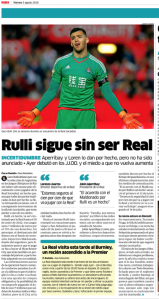 The situation surrounding 24 year old Gerónimo Rulli is complicated to say the least. Spanish newspaper Marca try to get to the bottom of it on Friday and it’s interesting stuff.

By now, Rulli was expected to be a fully fledged and permanent Real Sociedad player, the club he’s been on loan at since 2014. Previously, Rulli had played for Estudiantes in his native Argentina.

From Argentina he joined Deportivo Maldonado in Uruguay. They finished 12th in the second tier of Uruguayan football last season, but Rulli was never going to actually play for the club.

Instead, just like Jonathan Calleri, who signed for them from Boca Juniors, Deportivo Maldonado was merely a holding club for Rulli. A club which could loan the player out to others, and then receive a big profit for stakeholders in the future.

Marca say that Real Sociedad fans are nervous that a deal hasn’t been announced yet. The newspaper explain that, in theory, Rulli is joining Real on a deal until June 30th, 2022. The Spanish club would be paying €7m for 70% of his registration rights.

That money was expected to go to Deportivo Maldonado, but Marca says it now seems the payment has been made to Manchester City, who they say also had a percentage of the player but then bought all his rights.

The idea now is that Rulli will arrive at Real Sociedad for the €7m, but with a clause allowing Manchester City to buy him back for €14m.

That’s unless there’s another twist.

There’s no suggestion Manchester City or Real Sociedad have done anything other than spot a good goalkeeper, one who debuted for Argentina at the Olympics yesterday, but the idea of using a club solely as a holding company, looks to circumvent other regulations.