Elseid Hysaj’s situation at Napoli is a rather intriguing one, as the Albania international, a near guaranteed starter under Maurizio Sarri, is now seen as the third or fourth choice for the right-back role with Carlo Ancelotti at the helm.

Being pushed to one side by the new manager only stoked the already existing rumours sending the defender to Chelsea, and there was a time when a deal seemed close.

Yet, here we are in January, and nothing has happened. Why? Because Aurelio de Laurentiis wants the €50m in his release clause. 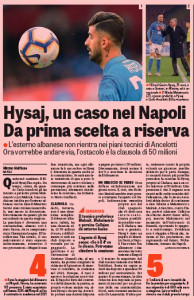 However, that doesn’t mean a transfer won’t happen, as the Italian newspaper see a move to Stamford Bridge as the ‘only possibility’ for Hysaj, and a future scenario is already being drawn up.

After six months without football, De Laurentiis will have little choice but to lower his demands, allowing Chelsea to get their man for less.

That seems wildly optimistic, considering he’ll still have two years left on his contract and right-backs aren’t exactly plentiful on the market these days, but Marina Granovskaia and co. can always give it a go.

“I’m focused on Arsenal” – Starlet speaks of first season at...