According to L’Equipe, Turkish side Osmanlispor are showing an interest in Leicester City defender Yohan Benalouane.

The French born defender could be surplus to requirements following arrivals at the Premier League side this summer, and has seemed close to a Leicester exit for a while.

It’s been reported Benalouane has been approached by Osmanlispor, and the central defender has been offered a three year contract. It’s likely Leicester City would allow the move, as it gives the Foxes an opportunity to get him off the wage bill.

Benalouane signed for Leicester City from Atalanta in 2015, but was frozen out by former manager Claudio Ranieri. 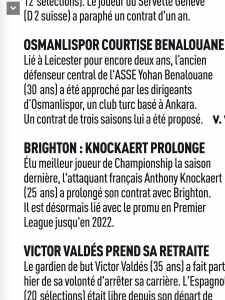 Under Craig Shakespeare the 30 year old managed to get some games, mainly due to injuries and suspensions.

However, with Leicester City signing Harry Maguire from Hull City his future with the Premier League side is uncertain.

A move back to Serie A could be an option for the player, but he had a bad experience whilst on loan with Fiorentina two seasons ago.

There’s no mention of a transfer fee.