Marca, despite being closest to the club’s sworn enemy Real Madrid, are often quite good on Barcelona news.

They have contacts at the club and tend to look at things a little more calmly than their Catalan counterparts who live 24/7 in the Barca bubble.

In their Tuesday edition the Spanish newspaper says Barca sources have denied reaching an agreement with Everton for the sale of Yerry Mina.

The Toffees are said to be interested but Lyon are ‘stalking’ and could pounce at any moment.

For Manchester United, Marca say Jose Mourinho’s club ‘could’ have made an offer in the past few hours, clearly doubting Catalan claims that a bid was put down on Sunday. 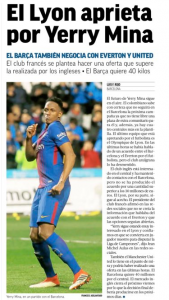 So the situation as Marca sees it is that Everton remain interested, no fee has been agreed at this stage, Lyon are ready to make their move, and Manchester United probably haven’t yet done so.

It’s once again stated that Barcelona want €40m for the player, which is a very ambitious figure given they’d have struggled to get €20m before the World Cup.