Tottenham Hotspur’s search to a permanent successor for José Mourinho goes on, more than a month after the Portuguese tactician was escorted to the exit.

One of the names linked with the north London club job is Belgium head coach Roberto Martínez.

Het Belang van Limburg now claim the Premier League side have ‘asked’ the Spaniard to become their manager next season.

Two weeks ago, Spurs made ‘first contact’ with the 47-year-old’s entourage, but they didn’t table a concrete proposal. It’s stated this would indicate he’s not on top of their list.

Martínez, who is currently in charge of Rode Duivels, is preparing for Euro 2020 with Belgium. The national team players will start preparation for next month’s tournament from May 31st.

If Tottenham ‘really want to push’ for Martínez, they must make an offer before the end of this week. It’s not been made clear whether or not this is the deadline set by the Belgian FA, but this could be done with a view to not distracting their coach ahead of the UEFA tournament. 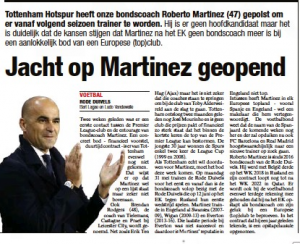 His contract with Belgium lasts until 2022, but there’s an exit clause that will allow the coach to leave his current role after the Euros.

HBVL suggest the chances are increasing for Martínez to step down as Belgium manager and take an attractive job at a (top) club. Whether it will be Tottenham or another club remains to be seen.