Wolverhampton Wanderers are eyeing a move for Sporting midfielder João Palhinha but could face competition from Everton and Leicester City for him.

That’s according to Record, who say the midfielder ‘promises to be one of the great animators’ of the summer transfer window for Sporting.

They explain that the Portuguese club are working on getting Palhinha signed to a new deal with increased wages as a reward for a season of ‘affirmation’.

However, there is ‘growing interest’ from a number of clubs after his performances in the league this season.

There are several sides in the Premier League who are following him with ‘particular attention’, and one of those are Wolves.

They ‘remain keen’ having been interested in the past but could face competition from Everton and Leicester, who have ‘made enquiries’ in the recent past.

There’s a feeling all three could approach Sporting this summer, and ‘it is certain’ that proposals will arrive at the club at some point.

They’re not going to sell cheap, though, and believe that Palhinha’s value has ‘more than doubled’ in the space of a year. 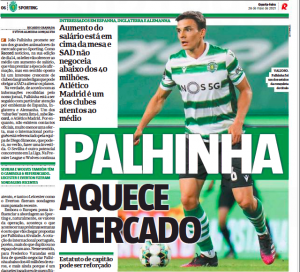 As such, it is ‘out of the question’ for them to negotiate a figure below €40m, particularly as the midfielder is a favourite of manager Rúben Amorim and the player feels happy at the club.

He could be tempted away as he is 26 and knows his next step is key, but everything will depend on the numbers that are put on the table.

One of the main players could be Jorge Mendes, which might give Wolves an advantage, but they, Everton and Leicester will have to convince with their offers before they get close to doing a deal.