Since the Portuguese media started reporting that Sporting were in talks for the signing of Marcus Edwards from Vitória Guimarães, there was a bit of a mystery regarding Tottenham Hotspur’s percentage over the move.

When the attacker left Spurs in 2019, it was agreed that the London side would have 50% of a future sale, but the problem was that the reports from Lisbon were only mentioning the payment between the the buyer and the seller clubs.

Now that the transfer was agreed, the newspapers seem to have found a consensus, and Tottenham are not getting much of this transfer now.

Record explains that Sporting paid €7.67m for Vitória’s share, which was also of 50%, with the other 50% set to still be Spurs’. 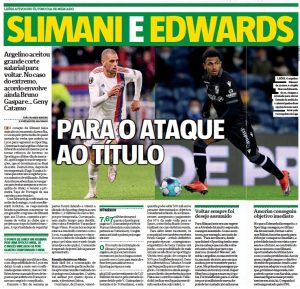 That doesn’t mean Tottenham won’t get anything for now, as Vitória are paying them 10% of their profit with the sale, which should be of around €700k.

It’s still not clear how this deal was done, as if Spurs had 50% of the players’ rights or 50% of a future move, but the fact is that the Portuguese media is pretty sure that the London side continue to have half of the player.

In case Tottenham chose to keep it, that may have been a good move, because if Edwards gets a move to the Premier League in the coming years, that will definitely cost more than his transfer from Vitória to Sporting.