Tottenham have ‘made an enquiry’ to Bologna for midfielder Mattias Svanberg after showing an interest in the January transfer window.

That’s according to Corriere dello Sport, who say he could be signed for a fee around €20m this summer.

Back at the beginning of January, we covered a report from Calciomercato that stated Tottenham were keen on Svanberg and had ‘made first enquiries’ ahead of a possible move.

That never happened in the winter window, but it appears that they are still keen on him as they plan their summer rebuild under Conte.

Corriere explain that Svanberg is yet to sign a renewal with Bologna, and that means his future is in doubt as his current contract is set to expire next summer.

That means Bologna could be forced to sell this summer to avoid losing him on a free next year, and it seems Tottenham are looking at a possible deal.

According to the newspaper, they are one of several Premier League sides to have ‘made an enquiry’ about the 23-year-old.

One issue at the moment is that Bologna do not want to sell and have put a ‘high price’ of €18-20m on their man at this moment in time. 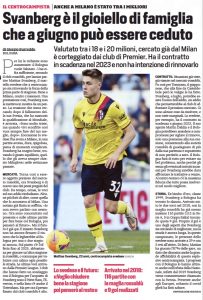 Their intention is to avoid being forced to sell, preferring to convince the player’s agents to sign a new deal so they can then sell for a higher price, and there is confidence they can come to some sort of arrangement.

That would likely see Svanberg sign a new deal with a clause, or at least an agreement to sell for a price that he and his agent find acceptable. At the minute, though, the player has ‘no intention’ of signing a contract extension.

That gives Tottenham the chance to get their man, although it seems Bologna’s intention is to try and protect themselves from any advances as much as possible.