Home Europe Tottenham player’s transfer should ‘certainly not be ruled out’ after rejecting one...
SHARE

Mousa Dembele has one year left on his contract at Tottenham Hotspur and his agent earlier admitted the midfielder would not sign an extension with the north London club.

Juventus, AS Roma and Inter Milan were linked with a move for the Belgium international.

Earlier in June, we covered a report from Sky Italia, who carried pictures of the midfielder’s midfielder’s agents Tom De Mul and Yaya Sharifi at the Nerazzurri’s headquarters in Milan.

Belgian newspaper Het Nieuwsblad now claims the former Fulham man rejected an opportunity to join Luciano Spalletti’s side, even after the Serie A outfit approached the Premier League club to negotiate a transfer.

There is no mention if Mauricio Pochettino’s and Inter agreed a deal, but they claim that Dembele rejected the Italian club after he failed to find a financial agreement with them. 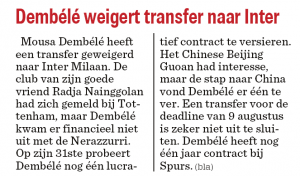 The 31-year-old wants to bag one last big contract of his career, but he also rejected an opportunity to move to China. Het Nieuwsblad reports a move away from Tottenham should ‘certainly not be ruled out’ in the final week of the transfer window.