Following the news that Dusan Vlahovic would not be renewing at Fiorentina, the Italian newspapers are having a field day on Wednesday.

Remembering that Tottenham were one of the clubs pushing for him in the summer, both Gazzetta dello Sport and Corriere dello Sport have bits about Spurs’ interest in the Serbian.

Starting with the latter, it’s claimed Fabio Paratici and co. have the player ‘in their sights’ because he is seen as the ‘perfect post-Kane’ player, featuring similar attributes at a young age, capable of dominating in the air and finding the back of the net with ease.

It’s believed from Corriere’s end that a fee of ‘no less than €75m’ would be needed for secure Vlahovic’s signature in January, which is the earliest he will be on the market for, as his contract with Fiorentina expires in 2023 and the Serie A club will want to get as much as possible for him. 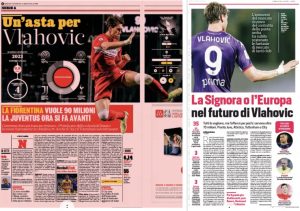 As for Gazzetta, they explain that if Tottenham ‘decided to sell their centre-forward’ in 2022 to Pep Guardiola or another interested party, then they could ‘return to the charge’ for Vlahovic.

This is seen as one of many ‘plots still in full development’ by clubs around Europe for the Fiorentina star, which isn’t exactly comforting the Serie A side in their desire to at least finish the season with their striker.