That’s according to SportBILD, who cover the player today and explain how all the top clubs in England are lining up to try and sign him.

Wirtz is considered the next big thing in German football and is currently proving that with his performances this season, with six goals and five assists in eight games in all competitions so far.

That form has not gone unnoticed by the big clubs in Europe, with several reports in Germany already linking those in England with a move.

Manchester City have already been pushed to the front of the queue, with it recently reported that they were watching the youngster intensely.

SportBILD continue that theme today and say that experts are convinced Wirtz will bring in €100m or more in the coming years, and top clubs like City and rivals Manchester United are ‘already watching him regularly’.

It’s not the first time they’ve shown an interest, with the family having met representatives from the likes of Manchester City back in 2019. Indeed, they were even ‘shaking hands’ with those clubs when it was clear they needed to leave Cologne.

He instead ended up at Leverkusen, where he’s continued to shine, recently signing a deal with the club until 2026 and increasing his salary to around €5m per year. 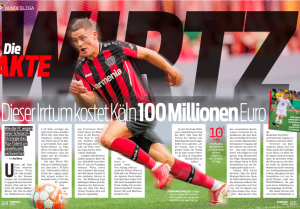 At the moment, a top transfer is not an issue, according to his father, ‘even if the top clubs from England could soon get serious’ about him.

“Florian is a young player. He has to mature. It would be wrong to interrupt this process,” the newspaper quotes him saying.

“It’s a great goal to play in the 2022 World Cup. For that, Florian’s training must continue calmly and continuously.”

If that plan works out, Wirtz will ‘probably’ move after that in 2023, when Manchester United and Manchester City will have to pay a top sum, with €100m already ‘realistic’.