According to the outlet, Monaco, Roma and Tottenham Hotspur are all keen on signing the 22-year-old, even though the club’s desire is to keep for much longer.

They make it clear the biggest threat is Monaco, who have recently offered €18m and could still raise this bid due to the many sales they’ve completed this transfer window. 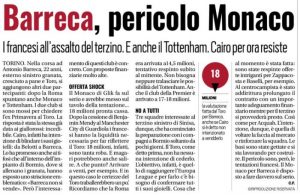 They don’t say the same about Tottenham, even though an offer from the London side was also of €17m to €18m. But whilst there’s no immediate fear of an increased Tottenham offer, it is Spurs after all, it’s something which isn’t ruled out.

Torino’s idea is to keep their stars in order to get a place in the Europa League next season, but the question now is how long can they resist.

Tottenham are just one of many clubs keeping an eye on the Turin club, but there’s unlikely to be any bargains for Mauricio Pochettino, with Torino not keen to let their best youngsters go for anything other than premium prices.