There’s a tug of war between the Turkish and French media over where Emmanuel Riviere will end up this summer.

Rafael Benitez doesn’t count on the 27 year old in his Newcastle United plans, so a change of scenery is likely.

On Thursday, claims from Turkey said there’d been a ‘happy ending’ between Osmanlıspor and Newcastle in negotiations, and Riviere was on the verge of a move to Turkish football.

No transfer fee was shared, with the Turkish claims explaining that was being kept private and between the two clubs involved.

Friday’s edition of L’Equipe has it differently, with the French newspaper saying Metz are still in the race. The French club have been working on signing Riviere from Newcastle ‘for several weeks’, and there’s optimism a deal can be done. 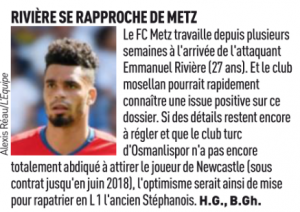 The interest from Osmanlıspor is mentioned by L’Equipe, but they clearly feel there’s no agreement yet with Newcastle, Metz still have a chance, and Turkish reports otherwise are premature.