Gedson Fernandes is leaving Tottenham Hotspur in January, according to reports from the Portuguese media today.

Newspaper Jornal de Notícias claims that Benfica made the decision to cut short his loan spell, which was supposed to run until the end of the season.

The outlet recalls that both the Eagles president Luís Filipe Vieira and Tottenham manager José Mourinho had already commented on the possibility, with the Special One confirming that the midfielder wouldn’t get many chances.

Now the newspaper says the case is ‘politically done’, as Benfica manager Jorge Jesus has already been communicated about Gedson’s return to the team. 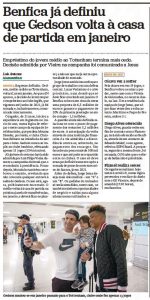 It’s said that the player is initially rejoining Benfica’s squad, unless some other ‘market opportunity’ shows up for him before the end of the January transfer window.

Loaned to Tottenham at the start of the season, Gedson has only made one appearance for Spurs, which was an EFL Cup clash against Chelsea where he played for 63 minutes. The Premier League side had an option to buy him for €50m.