As well as looking for some defenders, with the likes of Takehiro Tomiyasu targeted, Tottenham are thinking about the striker position, where they may either need a backup or a replacement for Harry Kane.

Their preference, perhaps very understandably, is to continue with their current star in order to give Nuno Espirito Santo the best chance of achieving his goals, but there’s also a reality out there where they might have to move on.

If they do, one player Tottenham are likely to target is Dusan Vlahovic, currently contracted to Fiorentina in Italy.

The Serbian striker scored 21 league goals for the Serie A side in the league last season, helping them avoid the humiliation of relegation in the process, and in doing so caught the eye of a lot of big clubs.

Tottenham are one of those, and Gazzetta dello Sport claim Spurs, led by Fabio Paratici, have ‘knocked on the door’ for the goalscorer.

It’s hinted the London club came forward with an ‘important’ offer of over €40m for the striker, although that wasn’t deemed enough by the Italian side. 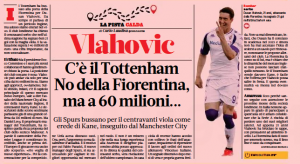 Gazzetta explain the board ‘kindly shut the door’ to Tottenham, and made their stance clear: Vlahovic will only leave for €60m.

That’s a large fee for a backup, but it’s clear that should Kane be sold, those demands could, and probably would, be met to sign a 21-year-old who presents a similar build and a keen eye for goal.

Tottenham have been warned, and they know exactly what they need to do if they want to get their man.