There’s less than two days left of the summer window for English clubs, and Bruno Fernandes remains a Sporting player.

Having been linked mainly with Manchester United since around March, Tottenham strongly came into the picture last week. The London club sent officials to Lisbon to negotiate with the Lions, but weren’t able to reach a deal for the midfielder.

Wednesday’s edition of A Bola reports Tottenham ‘climbed the charts’ and have now made four offers for the Sporting player.

Firstly they offered €45m whilst still in England, then in Lisbon there were two more offers, of €55m and €60m, and when returning to London a new offer of ‘around €65m’ was sent to Portugal.

All these offers have been including bonuses, and aren’t acceptable to Sporting. As has been repeated almost religiously, the club want €70m. A Bola today say they want that in ‘cash’, but it’s got to be highly unlikely they’d stick to such a demand. 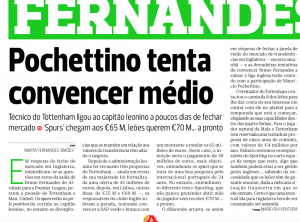 Mauricio Pochettino is said to have spoken to Bruno personally, something which seems to happen in all Tottenham pursuits, yet that’s irrelevant until a deal is agreed with Sporting.