Adrien Rabiot’s contract at Paris Saint-Germain expires in the summer and it’s already been made clear to the Ligue 1 winners that he will not sign a new deal.

Friday’s edition of Catalan newspaper Sport claims the midfielder’s priority is to play for Barcelona, but no deal has been agreed yet between the two parties.

The 23-year-old’s mother, Veronique Rabiot, who is also his agent, has met two Premier League clubs in recent days as Tottenham Hotspur and Liverpool are interested in the Frenchman.

Rabiot admitted being uncomfortable at PSG and that he would like to leave Parc des Princes this month in order to avoid any potential problems with fans.

Due to his current situation, several clubs have made an approach for him. 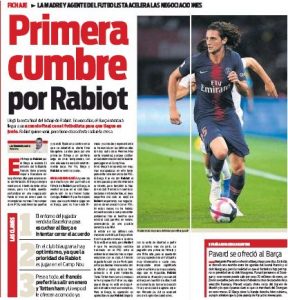 It’s explained that both the north London club and the Premier League leaders have ‘proposed’ to sign the player in January, something that seems ‘impossible’ for the Spanish champions to do in the winter market.

With Ernesto Valverde’s side out of the race for Rabiot this month, Tottenham and Liverpool could help him get out of PSG in the ongoing transfer window.