When Tottenham Hotspur scouts were seen watching Porto this weekend and last, it was easy to guess they were keeping an eye on Ricardo Pereira, who they’ve been linked to for a couple of months now.

But the club emissaries keep showing up at different Portuguese clubs, and the latest game watched was Benfica against Chaves on Monday, report O Jogo.

It’s not clear who the scouts were watching this time, especially because Tottenham haven’t been seriously linked to players from Chaves or Benfica lately. 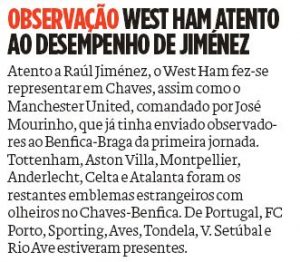 In case the officials were just sitting and waiting for someone to impress, there wasn’t much to watch. Benfica struggled until finding a late winner from Haris Seferovic and there wasn’t an outstanding performance from any player.

Chaves did a great job defending, goalkeeper Ricardo and defensive midfielder Jefferson played their part in it, but it’s still hard to imagine a club like Tottenham signing someone from such a humble side.

Tottenham haven’t previously been one of the English clubs to send scouts around Portugal often, but it appears that’s changing. Sport Witness will keep an eye on the official scouting lists this season, and see if a pattern emerges from Tottenham’s spying missions.

“He was certainly offered by Mendes” – Super agent approached Wolves with specific name, ‘have to see’ what outcome is

“He was certainly offered by Mendes” – Super agent approached Wolves...