Home Europe Tottenham have ‘enquired’ about club star – Would need to be swap...
SHARE

Already interested in Paulo Dybala back when Mauricio Pochettino was in charge, Tottenham continue to be linked with the Argentine.

The playmaker’s contract situation (it expires next summer) has started to become a worry for the Juventus brass, and talk of a potential exit is growing by the day.

Most big Premier League clubs have been linked, including Spurs, with Corriere dello Sport looking at the situation on Tuesday, stating the London side have ‘enquired’.

The newspaper make it clear that Juventus are fully aware they will not be receiving ‘cash only’ offers this summer for the former Palermo starlet, aware the Covid-19 pandemic and the financial crisis that has come with it has left clubs, even rich Premier League ones, with lighter pockets.

That’s why a swap ‘could arrange the situations both in the bank accounts and on the pitch’. 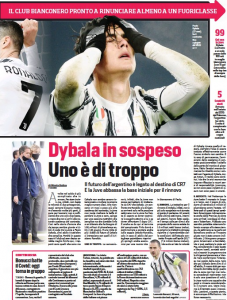 Any Dybala to Tottenham transfer would be hefty, regardless of his contractual situation, meaning high wages alongside a player sacrifice.

Who that could be isn’t said, but with Juventus looking to rebuild, players like Harry Kane, who allegedly wants out of the London club, or even Son, could do the trick, if Juventus were to add a bit on money on top of their player.

We all know Daniel Levy wouldn’t want to part with either, but if José Mourinho is pushing for Dybala, then someone will likely have to make way and be included in whatever deal is arranged.